Book three of the Return of the Elves. Let’s go! (This is about my favorite character so even more hype)

After more than three hundred years on Earth, Prince Ralan has finally returned to Moranaia. But with his wicked brother Kien on the loose, the homecoming is a short one. A dire vision sends Ralan back to Earth to save his soulbonded  from his dark brother. The problem? Ralan’s Sight grows more erratic by the moment eve as danger closes in on every side.

A woman far from home

Ever since a failed alliance ruined her family, Cora has lived on Earth. Far from discontent, her days are spent running her clothing shop and helping newly arrived fae adapt to mundane life. Then a golden-eyed prince strides into her store, trouble stalking  his heels. Big trouble.

Ralan’s sight might be broken, but one thing remains clear — stopping Kien will mean Ralan’s death. So how could the Gods choose now to introduce his soulbonded. A Ralan  and Cora  search for Kien, their relationship grows stronger. Unfortunately, so does the threat. Now Ralan must choose between his own life and the fate of all their worlds.

Short Synopsis By Me

Book three and its supposed to be about my favorite character thus far? Count me in. I am super excited to have more of a focus on Ralan. Also, he loses his sight this book. What will that make him? I’m not sure but I’m excited to find out. Also, new formatting.

I liked this book the best thus far and hated it at the same time. I loved it because sassy goddesses, Ralan’s powers, and Eri (perfect cinnamon roll Eri). I hated it because of Cora, which is a shame because Cora is Ralan’s bonded. Whatever though, we win some and we lose some in terms of liking characters.

This book takes place immediately after 2. Ralan must go to Earth to find the one thing that can stop his brother: his bonded Cora. When Cora’s friend and half-elf Maddy, gets kidnapped, Ralan and Cora find  themselves trying to find her and drawn to each other. Only, Ralan’s history and Cora’s past come to reveal that they are deeply connected in a way neither new. Ralan rejected to marry Cora three hundred years ago, sending her family into ruin and leading to her having to run from her own kingdom. Her pain was the cause of him, and Kien, Ralan’s brother is the one who reveals it. Ralan must figure out a way to kill Kien, knowing he will surely die himself, all without the use of his powers.

Goddess of Time her sass; I didn’t think that all caps lock screaming goddesses would make me laugh so much but it did. The Goddess of Time does just that. She’s sassy, and over bearing. I love it.

Eri and Ralan’s relationship; Is there a better parent child relationship? I’m not sure, but I love this one. Eri is perfection and Ralan is a fantastic dad, for what its worth. I will protect them at all costs.

The way the power of sight works; I find it to be the best case, seeing all, but having to follow, only knowing with the Goddess allows for them to see or know. Foresight can always either be bad or good. This time I am resolute  in believing it was good.

Continuation of expanse; The culture is built more, as are identities of the exiled fae and the world surrounding it all.

Kien’s death to be more dramatic; You’d think after all the time that was spent getting to him and his evil, that his death would be more dramatic. Although, I suppose  it is irony that it was not.

Why You Should Read:

“Finally, Ralan reached out, hoping to connect with the only one who’d been consistently ignoring him — Megelien, Goddess of Time and Seers. She Who Hid and Revealed. She who was blocking the fuck out of the things he needed to See. There was a time he hand’t had to search so hard for the answers he needed.

‘NO.’ ” – Ralan trying to make up with the Goddess of Time and for her to tell him he hasn’t done enough for her forgiveness yet.

“But fear and logic were far from friends.” – Ralan’s thoughts about his own inability to use blood magic without becoming his brother. (i.e. evil) 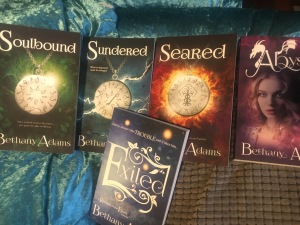