This book is a part of the Shattered Sea, the second in fact. The cover art for this is interesting, in my opinion. A wave of steel, with weapons of all sorts. I wonder what that means for the book especially considering the last one.

Half the World by Joe Abercrombie

Sometimes a girl is touched by Mother War.

Thorn is such a girl. Desperate to avenge her dead father, she lives to fight. But she has been named a murderer by the very man who trained her to kill.

Sometimes a woman becomes a warrior.

She finds herself caught up in the schemes of Father Yarvi, Gettland’s deeply cunning minister. Crossing half the world to find allies against the ruthless High King, she learns harsh lessons of blood and deceit.

Sometimes a warrior becomes a weapon.

Beside her on the journey is Brand, a young warrior who hates to kill, a failure in his eyes and hers, but with one chance at redemption.

And weapons are made for one purpose.

Will Thorn forever be a pawn in the hands of the powerful, or can she carve her own path?

(The blue was necessary, because in cover it is colored. I wanted to give you all the full effect.)

Short Synopsis By Me

Throne is a fighter, and she wants nothing more than to be a warrior for her country. The training masters are not so kind. After an accidental murder Throne is certain her life is over, but the cunning Father Yarvi takes her under his wing. With a mew master and a journey around the world, Thorne learns of true strength and becomes what songs are made of.

Brand is an orphan, blacksmith turned warrior. He always dreamed of greatness that could bring  he and his sister out from poverty. Life is not so kind, and a single decision to tell the truth regarding Thorne costs him everything. When he gets the chance to travel with  Father Yarvi around the world in an attempt to save their kingdom, he jumps on the chance wishing to prove himself. He discovers that great deeds are not always the ones that are known.

Same map but expanded? New main character? More world politics. I hope that the characters from the first book are developed more, if at all. I need to know more of those who survived; Sumael, Rulf, Isriun. I am excited and also filled with dread. What will these new characters bring to the table?

Okay well. Thanks Joe Abercrombie. Making me fall in love with more characters. This boo took me an hour longer to read than Half a King, which is very interesting. I typically average about the same for books that are about the same in length. I have no clue why, but it may be due to the shifting perspectives. Either way I loved this book more than Half a King.

I will start with the side characters. I love them. All of them. The crew of the South Wind, the now again Queen Laithlin, the Empress Vialine. They were far more well developed in this book I feel. Additionally we got more of Sumaela and Rulf. I adore them all.

Yarvi once again proves himself deeply cunning and absolutely horrifying. I adored it. I need more of his antics in my life. In the quotes below you will see that the people of the world view him akin to his mother. It’s surprising to think that a few short years prior he was the “crippled son” and shown so much scorn. I do not relate to him, but he is a brilliant character. His motivations are fleshed out and so grey.

Grom-gil-Gorm, who I did not mention in my first review. The reason for this is because I did not know much of him besides a few of his comments, a few scenes, and his title. Grom-gil-Gorm can not be killed by a man. He is the strongest warrior alive with the titles “Breaker of Swords” and “Maker of Orphans.” If that isn’t terrifying, I don’t know what is. I like him. I understand his motivations for what he does, and I appreciate that he does things as he does.

Politics, Culture, Religions. Before I go into our two leads. I will mention that this book goes further into all of these aspects. The different countries and their cultures, the world politics, the religions. The religions are perhaps the most interesting to me. I can’t wait to see how the last book goes because not all battles are fought on the battlefield and  this book proved that.

Thorn/Hild Bathu, our female main lead. I loved her from the beginning when she was introduced as the only female trying to become a warrior. Every test was thrown her way to fail, and then she ended up killing a boy. She ended up a murderer and that’s what got her in with Yarvi, and ultimately her skill she has at the end of the book. Now mind you, I like my feisty heroines, and I don’t think that the fight in her ever disappears. Instead it is refined, sharpened, aided. She becomes a time bomb into an assassin’s blade. It was the sort of transformation that is not all to different than Arya Stark. However Thorn is not an assassin. She is a warrior and she proves that by standing toe to to with Grom-gil-Gorm. I loved watching her bloom, and her own hasty judgements. I loved watching how she staid true to herself, and just became a better form of herself. She became a better person, and I adore that.

Brand, our male main lead. He is kind, the opposite of Yarvi and I can not wait to see him toe to toe against  Yarvi in the future. How I hope he will be. Yarvi offered him a position to stand in the shadows but Brand will stand in the light. He will do what is good and right. He is brilliant, strong, can carry the weight of a ship on his back, and will defend for what he believes. He is gorgeous, and the ideal of a warrior. His story really took hold when he was denied what he had dreamed of. He tried to make a name for himself, fell for Thorn, and learned that perhaps he didn’t want to be a warrior after all. I adore him as well. He better come back.

I would have liked to know exactly how much time passed between the two books. I do not think I missed the detail, but I could have.

Since, I feel that my qualms were answered from the first book, I really have nothing else to say.

Why You Should Read:

I find this book deeply fascinating because for how much fighting there is, it is more political than anything. It’s a great second book to the first one. This one does let you know there will be a third, while the first could have stood alone.

“The best place to sheathe a blade is in your enemy’s back.” – Thorn’s father’s advice

“As if the truth  is precious. I can find a thousand truths under ever autumn leaf, Brand: everyone has their own.” – Yarvi to Brand

“A man who gives all his thought to doing  good, but no thought to the consequences… That is a dangerous man.” – Yarvi to Brand

“They say he was cunning as Father Moon, a man rarely to be trusted and never to be crossed.” – about Yarvi

“A man bent on self destruction will find his way there sooner or later.” – Safrit to Yarvi 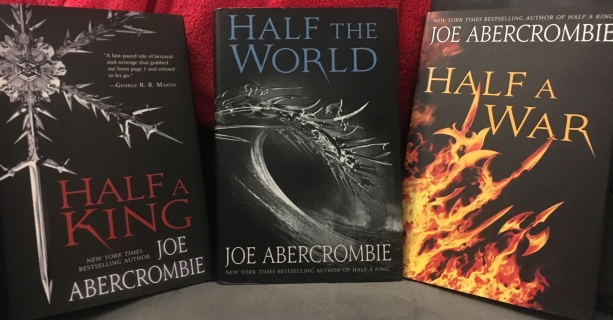 2 thoughts on “Half the World Review”